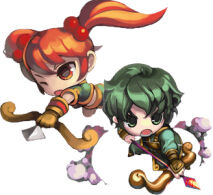 "An archer is as quick as a fox and has the eyes of an eagle. Even though archers may look cold hearted and distant, they fight for nature and possess a vast amount of knowledge that they use to their advantage. Their ancient lore includes knowledge about poison and toxins and using the energy in nature. Archers use their weapons in close combat and long range combat with lethal accuracy." ~Nostale UK.

The Archer class emphazises on far ranged combat and its skills are effective at taking out single targets from a ranged distance. Besides its powerful ranged skills, it is the fastest class. This proves it to be a great job for killing enemy targets using the hit and run technique. The Archer is also capable of dealing a decent amount of AoE(Area of Effect) damage. The Archer's weapons are the bow and arrow and daggers. The Archer's four specialists are:

These are a list of skills used by the Archer job:

An Archer's spare weapon is it's Dagger. The Archer uses the Dagger when it is out of arrows and/or the enemy target is in close range.

Community content is available under CC-BY-SA unless otherwise noted.
Advertisement